Developers Forum for XinFin XDC Network is a community of 1,122 amazing users

Most people are familiar with NFTs as decentralized objects that show ownership of an item or keep a unit of account. An NFT can represent literally anything, even a decentralized application (DApp).

I recently made a proposal to the XDC Community (XIP Proposal) to standardize a new type of token — the SHARE. A SHARE is an NFT that represents ownership over a DApp and will take the incoming funds and distribute them among the token holders. Developers can also use these NFTs within their application to give the SHARES governance capabilities, such as access control and voting rights, by defining the tokens in the code itself.

There are 2 types of SHARES — SHARES and SPLITS. A SHARE acts as a share of a DApp that receives the dividends based on its performance while a SPLIT is a share of a SHARE, receiving the yield of the original SHARE while splitting the dividends again amongst a set of derivative token holders.

SHARES are not a crypto currency but a native crypto asset to a crypto application. The performance and relative value of the SHARE is predicated on the growth and use of the DApp and the accumulated fees that are dispersed among the token holders.

Example of a DApp with SHARES: 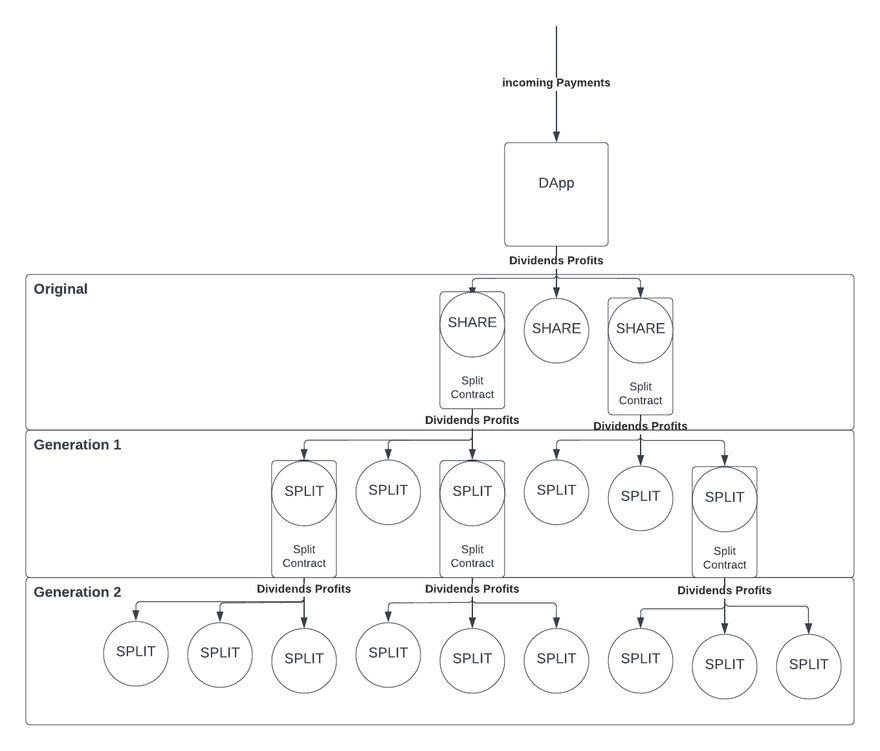 All function within contract can use this line of code at the bottom of their function to forward funds to the receiving function to allocate funds.

This contract bellow is an example of a lemonade stand contract that receives 10XDC for a glass of lemonade and divides those funds amongst a set token holders while keeping track of how many glasses have been sold.

SHARES & SPLITS allow developers to sell portions of their DApps by allowing a simple means of owning and distributing equity of profitable applications that reside on the XDC Network. This means an investor can invest in the DApp, to help the developer build more features or to help grow its user and community base while being attributed dividends. The value of the tokens are based on the performance of the DApp. Any DApp, no matter how big or small, can have SHARES to allocate profits.

SPLITS are uniform contracts to split SHARE tokens into smaller dividend tokens that redeem and split the dividends allocated to that associated token provided to the SPLIT contract. A SPLIT is functionally identical to a SHARE, but a SPLIT can only represent partial ownership of a SHARE, whereas a SHARE represents ownership of the DApp. If a DApp uses the SHARE tokens as governance tokens or in some form of automation, SPLITS cannot participate. SPLITS only redeem dividends from the SHARE that's been split.

We refer to these layers of SPLITS as generations, as shown in the graphic above. The original SHARE stands as generation 0, the next is generation 1, and so forth. All SPLITS in a given generation hold equal value.

How DApps Can Use SHARES

DApps can use SHARES in a few different ways:

Currently, crypto currencies are the primary market on blockchain. However, as DApps develop novel means of ownership, new markets will arise that are centered around the popularity and growth of DApps. As primary DApps interconnect with secondary applications that rely on them, both the secondary and primary DApps may become profitable. The SHARE holders of both are able to gain fees on the usage of their contract.

SHARES and SPLITs allow developers, investors, and DApp users to easily sell and invest in DApps of all sizes in a more autonomous way than was possible before. This model exemplifies the promise of blockchain.

The XRC-SHARE & XRC-SPLITS contracts have been submitted to be approved as an official standard on the XDC Network. To comment on the process or the contracts, check out the XDC-Community Github to participate in the XDC XIP process.

How To Create a XDCPay Wallet