Continuous innovation in blockchain technology has seen it become more mainstream. Particularly, advances in blockchain and distributed ledger technologies (DLTs) have pushed the technology beyond the disillusionment trough of the hype cycle, and are driving real productivity in major industries — -including finance and trade. Fundamentally, blockchain and DLTs are changing the nature of doing business across organizational boundaries, helping companies reimagine how they make and manage a variety of tangible and digital assets. 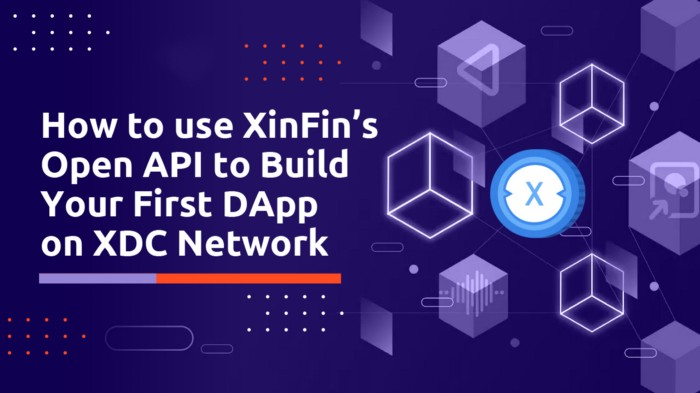 And, whilst there are many blockchains, each blockchain protocol comes with unique features and capabilities. With organizations seeking the best combination of the blockchain space, the demand for hybrid blockchains has risen, amidst the boom in blockchain demand. Taking the case of finance and trading industries, it’s evident that such industries need a hybrid system that allows them to reap benefits associated with public and private blockchain networks. And, these benefits are: improving access to a mass audience of adopters and protecting sensitive data

Combining attributes of public and private blockchains, hybrid blockchains provide some game-changing benefits, especially in the global trade and finance industries. The networks are considerably efficient and interoperable, supporting the development of highly scalable decentralized apps (DApps) and blockchain-powered platforms.

Having these insights in mind, let’s discuss how to use XinFin API when building your first blockchain app. Key areas to cover:

What’s more, the DApps backend code runs on a decentralized peer-to-peer XinFin network. This is in contrast to conventional apps where the back-end code runs on centralized servers. Note: a dApp can have a frontend code and user interface that’s written in an array of languages — just like an app —, and that can make calls to its back end. And, its front end can be hosted on decentralized storage like the InterPlanetary File System (IPFS).

With the unique features, DApps remain:

To have a better understanding of DApps, you need to know what are smart contracts — a dApp’s backend, for lack of a better term.

A smart contract is a code that lives on the XinFin blockchain and runs exactly as programmed. Once deployed on the network, you can’t change them. DApps are decentralized because they are controlled by the logic written into the contract, rather than an individual or company. This implies that you should design your smart contracts with care and test them extensively to eliminate bugs.

b). Why develop DApps on the XinFin Network

c). What tools do you require to Deploy a Dapp on the XinFin Network

To deploy a DApp on the XinFin network, you’ll need several tools. These are:

d). What’s XinFin’s API, and how does it work

A XinFin account is an entity with an (XDC) balance that can send transactions on a XinFin Network. Accounts can be user-controlled or deployed as smart contracts.

On the XinFin Network, there are two types of accounts:

Given the accounts on XinFin’s network, what are the key differences:

What’s more, XinFin accounts have four fields that demonstrate some uniquenesses in the two types of accounts. They include:

Let’s look at an example:

To check out the Address balance through the API (https://xdc.blocksscan.io/api/accounts/xdc8332dfdcec18d974eeac6bb2f84d571cac925511), you just need to change the address and you can view the information about the address

To create an account most libraries will generate a random private key. The private key is made up of 64 hex characters and can be encrypted with a password.

You need a private key to sign messages and transactions which output a signature. Others can then take the signature to derive your public key, proving the author of the message. In your application, you can use a javascript library to send transactions to the network.

The contract address is usually given when a contract is deployed to the XinFin Blockchain. The address comes from the creator’s address and the number of transactions sent from that address (the “nonce”)

Kindly Note: An account is not a wallet. A wallet is a key pair associated with a user-owned account, which allows a user to make transactions from or manage the account.

Equipped with insights on how an account is generated on the XinFin Hybrid Blockchain, let’s look at how Transactions work.

Transactions are cryptographically signed instructions from accounts. An account will initiate a transaction to update the state of the XinFin network. The simplest transaction is one that involves transferring XDC or any XRC-20 tokens from one account to another

On the XinFin network, a transaction is an action that’s initiated by an externally-owned account. In other words, an account is managed by a human, not a contract.

For example, if Sam sends Billy 100 XDC, Sam’s account must be debited and Billy must be credited. This state-changing action takes place within a transaction.

Gas is a reference to the computation required to process the transaction by a Masternode. Users have to pay a fee for this computation. The gasLimit, and maxPriorityFeePerGas determine the maximum transaction fee paid.

The transaction object will look a little like this:

But a transaction object needs to be signed using the sender’s private key. This proves that the transaction could only have come from the sender and was not sent fraudulently.

So for Billy to send Sam 1000 XDC at a baseFeePerGas of 190 gwei and maxPriorityFeePerGas of 10 gwei, Billy will need to pay the following fee:

Gas is required for any smart contract interaction too.

What is the transaction lifecycle?

Once the transaction has been submitted, the following happens:

Blocks are batches of transactions with a hash of the previous block in the chain. The blocks are linked together into a chain because hashes are cryptographically derived from the block data. This prevents fraud because one change in any block in history would invalidate all subsequent blocks as all subsequent hashes would change and everyone running the blockchain would notice.

By changing the block number through the API(https://xdc.blocksscan.io/api/blocks/2304) you will get all the details on the specific block number.

And, why are blocks important?

By spacing out commits, we give all XinFin network participants enough time to come to a consensus: even though transaction requests occur dozens of times per second. Worth noting, blocks on the XinFin Network are committed approximately once every two seconds.

How do blocks work?

What is in a block?

Several components are included in a block. These include:

What is a block size?

Worth noting, blocks themselves are bound in size. Each block has a target size of 15 million gas, but the size of blocks will increase or decrease in accordance with network demands, up until the block limit of 30 million gas (2x target block size). The total amount of gas expended by all transactions in the block must be less than the block gas limit. This is important because it ensures that blocks can’t be arbitrarily large.

If blocks could be arbitrarily large, then less performant full nodes would gradually stop being able to keep up with the network due to space and speed requirements

b). You can also check out XinFin Network JSON-RPC at https://apidocs.xinfin.network/ and check out the third party Explorer API at https://xdc.blocksscan.io/docs/

c). Are you interested in multiple SDK written in Go, Rust, Java, and XDC3 Android which can be used for mobile development? You can study multiple API Developed by XDC Foundation, in collaboration with LeewayHertz. Visit the XDC Foundation Github page to have a better understanding of SDK in DApp development.

d). To build a DApp with XinFin and Tatum — -which is a Next-gen blockchain infrastructure —, you can check the XinFin API at: https://tatum.io/apidoc

e). And to use Tatum API on your DApp or application, check out the step-by-step article https://blog.tatum.io/build-global-trade-and-finance-applications-on-the-xdc-network-with-tatum-993e9c75a289

How To Create a XDCPay Wallet