Mining bitcoin (BTC) and ether (ETH) is an expensive affair. The mining hardware consumes a superfluous amount of electricity and imposes heavy costs for buying and maintaining mining infrastructure.

A Morgan Stanley report estimated that bitcoin mining consumed more electricity than all of Argentina in 2018. Furthermore, in just 10 years of its existence, electricity used for mining bitcoin could make up 0.6% of the global electricity demand.

On the other hand, the second-largest cryptocurrency by market capitalization, Ether (ETH), or more commonly called Ethereum, consumes one-fourth of the energy used for bitcoin mining. Studies suggest that daily ethereum transactions use more energy than is used by an average family in the United States.

The extreme consumption of electricity to mine bitcoin and other cryptocurrencies using the Proof of Work (PoW) protocol has long been a concern for blockchain pioneers. To solve this, the XDC Network developed its exclusive XDPoS consensus protocol. 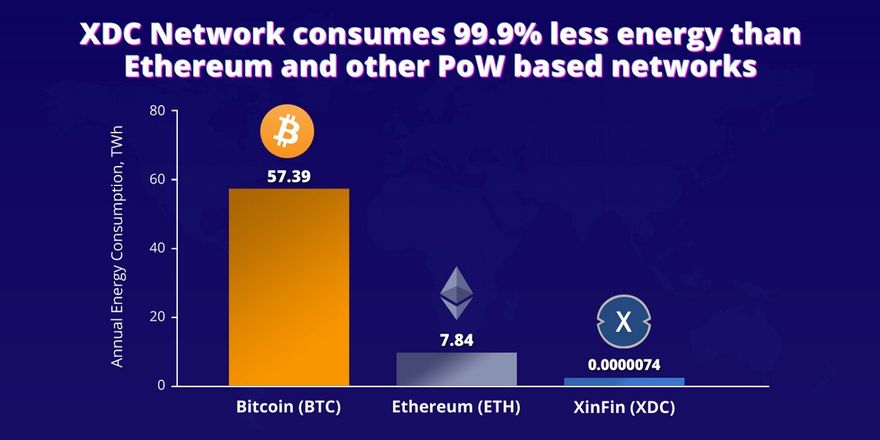 Bitcoin, the first public blockchain, powered by native cryptocurrency bitcoin (BTC) uses the proof of work consensus protocol for approving transactions on the network — known as mining. There are numerous researches that highlight the high-end expense of mining bitcoins.

If we go with the latest report, mining one bitcoin (worth US$9,707.94 at the time of writing) uses approximately 657.39 kWh of electricity, which is the amount of electricity used by an average British household in 59 days.

Ethereum was a diversion from the original concept of cryptocurrency that was brought in the form of Bitcoin. It was beyond just providing financial freedom to individuals. Today ranked one of the most successful blockchain projects, Ethereum is an open-source blockchain platform for developers to develop decentralized applications and smart contracts. It is powered by its native cryptocurrency ether (ETH).

While Ethereum’s roadmap indicated that they will eventually transfer the network from a PoW consensus to proof of stake, or PoS, the process seems far more complicated than seemed in theory.

Ethereum is also planning to launch Ethereum 2.0, which will use chains with several branches in a bid to increase transaction throughput on the network.

At the moment, however, Ethereum continues to run on the PoW protocol and relies on hardware mining to approve transactions and mine new ether tokens. Although it does not consume as much electricity as the Bitcoin network, the numbers are still significantly huge.

According to the latest data, the Ethereum network consumes 7.84 TWh of electricity each year and incurs a total cost of $781.5 million.

Delegated Proof of Stake or DPoS consensus protocol is hotly debated in the blockchain industry, It is a variation of the original Proof of Stake consensus model, which is more energy and time-efficient. And thus also saves cost.

XinFin uses its version of the DPoS consensus called XDPoS because of the issues observed with other projects using a different consensus protocol. One of those was the high amount of energy requirement and carbon footprint for mining cryptocurrencies in a PoW blockchain network such as Bitcoin.

XDC presents itself as a green coin and aims to save energy like other major cryptocurrencies that rely on power-consuming blockchain protocols. Thus, XDC coins are ‘mining-free’ or, simply put, they are pre-mined. This not only makes the network energy efficient but also increases the throughput of the network.

This is a feature that helps business participants involved in blockchain to perform optimally.

Going by the average annual costs of Ethereum, and XinFin, it is clearly visible that XinFin cuts the energy consumption by almost 99.98%. It is highly likely that PoW coins may become too expensive to mine over time and also deal with great damage to the environment. Hence, chances are, they may get outdated over time. That is also a part of the reason why Ethereum looks to switching to PoS consensus over time.

What is your view? Please Provide your opinion in the comment box.

Introduction to the XDC Network Masternode App with Improved Features.